What’s keeping your CEO up at night? 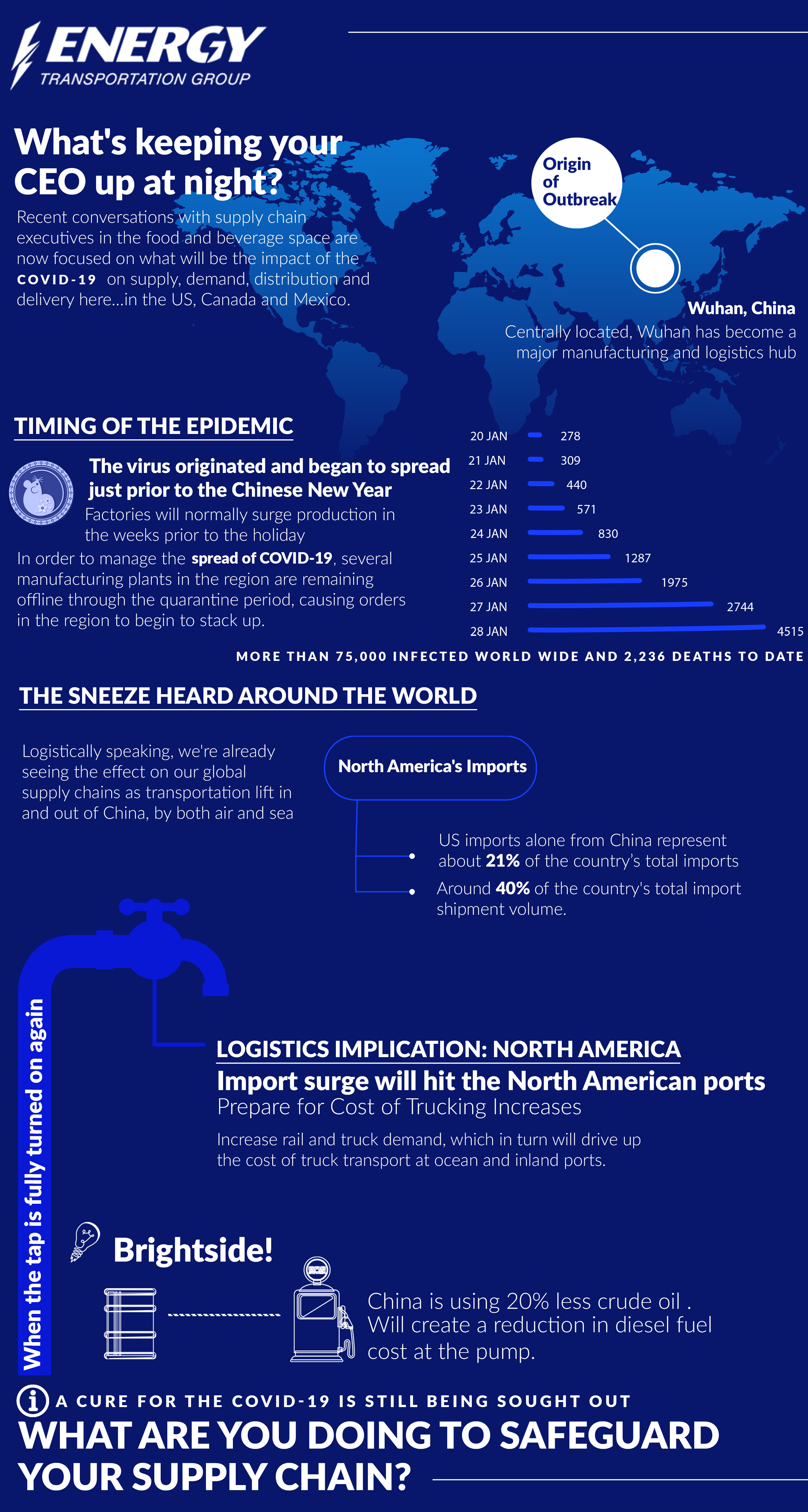 It seems like worlds away, but with improvements in the velocity of global logistics, our world is shrinking making countries like China seem like a back-door neighbor, figuratively as close as Canada and Mexico are to the United States. For this reason, an epidemic like the coronavirus which has recently reared its ugly head in the middle of China has an almost immediate impact on the flow of the North American supply chain.

Numbers are continuing to rise, but as of the middle of February 2020, more than 75,000 people worldwide have contracted the coronavirus, and more than 2236 deaths have been confirmed.

Origins of the Outbreak

The city of Wuhan is the capital of the Hubei province in China, is the largest city in the province, and the most populous city in Central China with a population of more than 11 million. From a population perspective, Wuhan is as large as both New York City and Chicago combined. Centrally located, Wuhan has become a major manufacturing and logistics hub with dozens of railways and expressways passing through the city connecting it to both other major cities, air and seaports.

Timing of the Epidemic

The virus originated and began to spread just prior to the Chinese New Year, the festival that celebrates the beginning of a new year on a traditional Chinese calendar. In preparation for the holiday, factories will normally surge production in the weeks prior to the holiday, creating enough orders to span the length of the holiday, and then wind down production in early to mid-January, resuming manufacturing operations in mid-February.

In order to manage the spread of the virus, several manufacturing plants in the region are remaining offline through the quarantine period, causing orders in the region to begin to stack up.

The Sneeze Heard Around the World

We’ve heard it said that “When the US sneezes, the world catches a cold”. Over the last decade, this has pertained as much or more to China as the country has started to play a larger role as the world’s factory. Logistically speaking, we’re already seeing the effect on our global supply chains as transportation lift in and out of China, by both air and sea, have been suspended, and some land border crossing in the region have been closed to other modes of transportation.

US imports alone from China represent about 21% of the country’s total imports, and around 40% of the country’s total import shipment volume. The impact felt due to the lack of air lift, specifically because of the suspension of air travel and air cargo movement, is already occurring. We are experiencing a shortage of high value components with compressed life cycles delaying production and assembly operations in North America’s near shore factories.

Additional pain will be felt in both industrial and consumer markets as the potential slow restart or stoppages altogether disrupts goods flow from China which operates six of the world’s ten largest ocean ports.

Prepare for Cost of Trucking Increases

In the mid to later part of February, factories in China, especially those outside of the more heavily impacted Wuhan region are starting to come back online. However, with sailings and air lift still limited, far less than normal volumes are trickling into North America. Without really understanding fully how the virus is transmitted, any shipments that do arrive at ports in the US from China are being heavily scrutinized, causing further delays.

When the tap is fully turned on again at the Chinese factories and ports of exports, an import surge will hit the North American ports, increase rail and truck demand, which in turn will drive up the cost of truck transport at ocean and inland ports. Another cost driver will be the need of importers to increase delivery velocity and expedite the positioning of inventory at the point of consumption. Many supply chain managers will want to stop containers that might have previously transferred to an inland port via rail at the first port of entry. Additional need for transshipment and truckload capacity will increase trucking cost at ocean port cities across North America.

If there is any positive to come out of this situation for North American logistics cost, it’s the fact that China, the largest consumer of crude oil in the world (about 14 million barrels per day) is using 20% less; a direct correlation to the still idled factories. As a result of the decreased demand, we’ve already seen a wholesale decrease in cost which will in turn, at some level, be realized at the retail level as a reduction in diesel fuel cost at the pump.

At the end of the day, the implications of the coronavirus on the cost of trucking and transportation in North America could very well speed up projected cost increases that economists and industry experts have put off to the latter half of 2020.

Traditionally, cyclical truckload increases in demand during spring (resulting from produce harvest and increased construction activity), cause spikes in demand which correlate to an increase in per mile truckload rates on the spot market. The cycle usually occurs around the 15th of May annually and continues into June.

Depending on when the current coronavirus epidemic subsides, it could usher in rate increased in the spot market even earlier; positive for truckload carriers, not so much for shippers.

This, combined with a forecasted driver shortage as a result of the implementation of the FMCSA’s Drug and Alcohol Clearinghouse, is expected to shrink available truckload capacity in 2020 and drive costs up to perhaps 2017/18 levels.

What are you doing to safeguard your supply chain?